I love these washbags and they can be used for more than just your washing essentials. The look stylish with the chunky plastic zip and with a variety of colours to choose from , you can order the perfect gift for someone this Christmas

The Tote Bag may be a simple bag but it’s probably one of the most popular. It’s just so handy to keep with you for those emergency shops or is equally useful for a trip to the beach. Made from lightweight spinnaker sail it looks stylish and packs away easily into the attached pouch.

The Black Friday discount is available until Midnight tonight and can be used on all products. Have a browse through all the products, add them to your basket and then just enter the code FRIDAY25 at checkout to claim your discount. You could finish all your Christmas shopping in one go!!

This week’s Christmas Deal – FREE Small Pouch (worth £3.00) when you purchase a Phone Stand!!

The Phone Stand is a relatively new product to the Out of Sails range and when you purchase one this week you will receive a FREE Small Pouch worth £3.00. The phone stand is made from spinnaker sail so we currently a great choice of colours available. It’s suitable for use with a phone, Ipad Mini, small tablet or Kindle. The Small Pouch will be perfect for holding your charging cables.

This weeks Christmas Deal – FREE large pouch (worth £8.00) when you purchase a Holdall!!

Hopefully next year we’ll be able to get away a little more and the Holdall is the perfect size for an overnight/weekend trip away. Made from sail cloth (if you choose one with a colour this will be spinnaker sail) with sail cloth handles it can hold all you need for a getaway and conforms to aircraft ‘carry on’ size (always check with the airline first!). PLUS you will receive a FREE large pouch worth £8.00 which you could use for toiletries, electronics, cables, passports and much more.

Looking for something a little different to give as a Christmas gift this year then The Pouch ticks all the boxes. Practical and stylish, The Pouch is made with spinnaker sail with a fleece lining and is perfect for storing your glasses or phone. There are a variety of colours available so something to suit all tastes.

Yesterday the Vendee Globe Race started from Les Sables d’Olonne in France with 33 skippers taking on the challenge of the single handed non stop race around the world.

Originally called The Globe Race, it first took place in 1989 and was won by Frenchman Titouan Lamazou , who took 109 days and 8hrs to complete the challenge. Nowadays the race is much slicker with the last race in 2016/2017 only taking Frenchman Armel Le Cleac’h 74 days and 3 hours!

This year there are 4 British skippers hoping to be crowned the winner:

No I’m not talking about the ‘Covid’ word but the other C word – CHRISTMAS!

I know it’s only October but many of us are already thinking about the festive season and how it’s probably going to be much different from previous years. So if you are looking for something different then why not browse through my lovely products to send someone an unusual gift this year.

The Christmas stockings were so popular last year, they are now available again to purchase through the website. You can choose the colour edging at the top of the stocking and if you would like it to be personalised just let me know which letter you would like.

The Beach Bags and are a relatively new addition to my products and I love making them!

Along time ago I picked up some old rope at a car boot sale and my intention was always to make a bag of some description and use the rope as a handle. It wasn’t until earlier this year that I decided on making the beach bag – must have been the inspiration of the sunny weather we had!

Using sail cloth means these bags are used to the all weathers, although not classed as waterproof they will offer some protection to the contents from the elements. They are a decent size (42cm x 32cm x 23cm) so you can fit everything inside that is needed for a day at the beach. Generally they will always be white on one side with a colour on the opposite side (this will depend on the colour of sails I have at the time)

These bags are great value at £15 each

Another lovely shop is now selling Out of Sails products! Always Plastic Free was opened to raise awareness of how much plastic is used and how we can cut down on our use of single use plastic. If you are near to Warsash in Hampshire you can visit Always Plastic Free to see some of my items for sale. They are open from 0900 to 1600 Monday to Saturday.

They have lots of other lovely products in stock and all environmentally friendly, a great place to have a browse (socially distanced of course!) 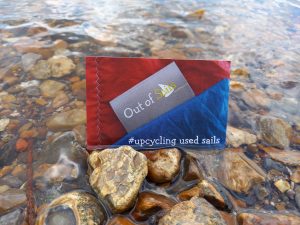